RNG in BC: some observations from the field

Late in 2019, I was invited to evaluate a proposed RNG facility to be built in the lower mainland. I knew
that meeting BC’s GHG targets would require fuel switching to electricity or RNG in legacy buildings (>50% of buildings standing today will still provide shelter in 2050) . I also knew that over 10,000 digesters were operating in the EU. So would RNG be cheap and plentiful in BC?

In this talk, I provide a summary of what I learned about barriers to the success of the RNG play in BC. I am hoping that by talking about these issues, we can prompt appropriate regulatory market shifts to unleash the potential for using RNG where appropriate. 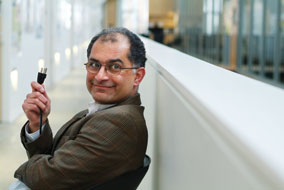 Hadi Dowlatabadi’s research is at the nexus of humans, technology and the environment. He has studied
climate change and its related response strategies since 1986. His projects are solution oriented and usually fall outside familiar disciplinary grounds. He sees the world as a dynamic non-equilibrium heterogeneous system where the search for complexity leads to paralysis and over-simplification spells trouble.
Hadi has a wide range of publications from books on how to choose electricity generation technologies to
different determinants of malaria around the world. He has over 150 peer-reviewed papers and has
supervised almost three-dozen PhDs. He has served on the editorial boards of five journals. Hadi is a cofounder of half a dozen companies attempting to refine and market technologies that pave the way to a
zero carbon economy. He is a University Fellow at Resources for the Future, a Washington DC think-tank. He is also Adjunct Professor at Carnegie Mellon University’s Department of Engineering & Public Policy.